You don't know how to use the 3 seashells? 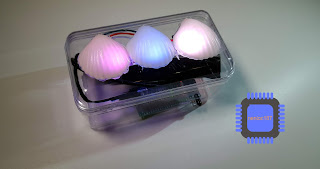 Since the Corona virus (Covid-19) caused a worldwide pandemic, we became aware how important it is to wash our hands properly. You should wash your hands for at least 20 seconds with soap. How to measure it? You can use your wet hands to start the stopwatch on your smartphone - not ideal. Or you can sing "Happy Birthday" twice. Well, this might be a little awkward. And if you are in hurry, you can sing the song much faster. I managed to sing two times "Happy Birthday" within 12 seconds. It would be nice to have a timer, that you can start touch-less. But it must look cool somehow. I remembered the classic SiFi movie Demolition Man (1993). Which takes place in 2032 and instead of toilet paper the people are using the three seashells. This would make a nice timer.

Most of the parts are somehow leftovers. The plastic box was a box containing chocolate sweets. I used three Neopixels from an old strip. The plastic seashells where also a sweet I know from my younger days. In German it is called "Schleckmuschel" or simply "Leckmuschel". Which both can hardly translated into English. Literally it would be "Seashell to suck" or "Seashell to lick". But I think the closest would be "Toffee in a Seashell". It was on sale as a retro campaign. A cheap IR proximity sensor and all of this controlled by an Arduino Nano.

To remove the candy from the seashells, I could licked them, till they are clean. But first of all this would have taken ages and it tasted not as good, as when I was a kid. So I soaked them in warm water for quite a while until the toffee was vanished into the water. I needed a box for the controller, the sensor and the three seashells to fit on top of it. An empty box of candy will do. Just cut a hole for the sensor to reach though. The controller, the sensor and the connection for the Neopixel get their own PCB prototype board. Now gluing the Neopixels and the seashells on the top of the box and connecting everything. I choose to power everything with a small USB powerbank, which is connected to the USB port of the Nano. Usually I would connect the power rails of the Neopixel stripe directly to the power source. But since this are only three pixels, I have no hard feelings about connecting it to the 5V output pin of the Arduino. 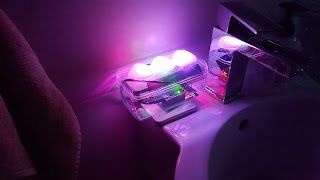 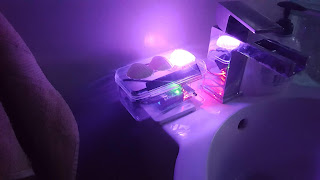 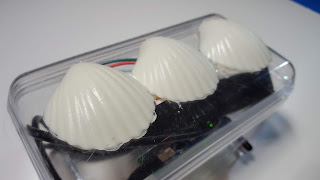 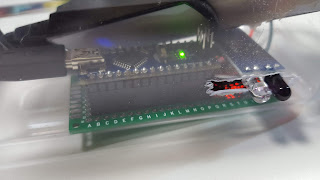 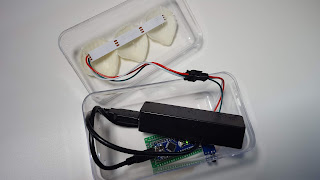