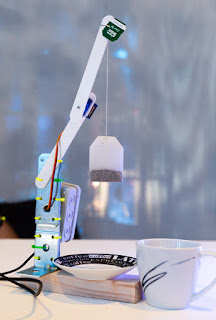 A wave of flu hit my hometown. And I wasn't spared. So my drink of choice for about three weeks was tea. I remembered how I saw a video, years ago, where someone used an Arduino Uno and a servo to dip a teabag into a cup. Well, it shouldn't be so hard to make a similar project with an ESP8266, should it?

Well, since I felt too sick to go outside, I took, what I've found in the basement. I still got some SG90 servos. And for the stand I used some angle brackets, which I fixed with some zip ties. As an arm for the servo, I found some plastic tongue depressors. 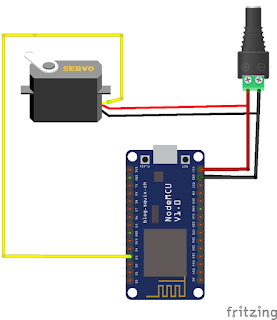 Quite simple. You can use the same 5V input for powering the servo and the NodeMcu. All you need is to select a digital pin for the servo. Any pin will do, since every digital pin on the NodeMcu has PWM capability.

The IoT TeaMaker was first featured at the Maker Faire Ruhr 2019 in Dortmund, Germany. Everyone could see the TeaMaker in action and try it for themselves. 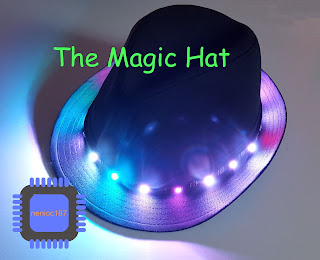 AVNET invited me to the "electronica 2018" in Munich to hold a speech about IoT and Neopixels. So I thought, wouldn't it be great if I could finish my speech with presenting a functional project on stage by controlling Neopixels with a smartphone. Something with a practical, everyday use in home automation? .... Yeah, I got it! A hat! Home automation at it's finest .. somehow. 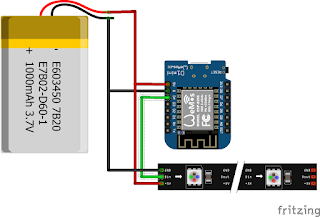 Quite easy. We just need a pin for the Neopixels. Although the WeMos and the Neopixels are working with 5Volts, they can be both be powered by a 3.7V LiPo battery for a short period. To wrap the stipe around the hat once, I needed a total of 19 Neopixels (with a specification of 60 LEDs / meter).

All LEDs are turned off

All LEDs are on

White on the front, red on the back

* Mode doesn't use the selected color