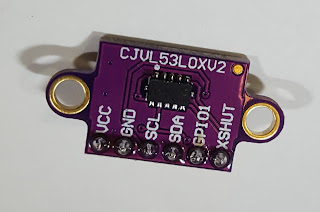 This time-of-flight sensor is a laser distance sensor, that emits a 940nm laser. It can measure distance up to 125cm quite accurate. Adafruit delivers a ready-to-use library and a functional example you should try. 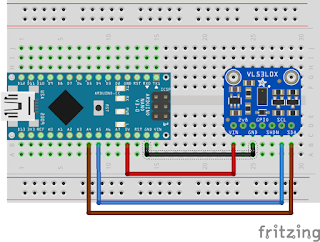 The sensor is connected via I2C. So you have to use pin 4 and 5 on the Arduino Uno/Nano (other Arduinos may have different pins for I2C). It works with 3.3 volts. But since the breakoutboard has a voltage regulator implemented, you can connect it also to 5 volt.

Where to buy?
You can find it on eBay, if you search for "Time of flight"
Or directly from Amazon: Time of flight
Arduino Nano
Eingestellt von Agis Wichert um 3:46 PM 3 comments: 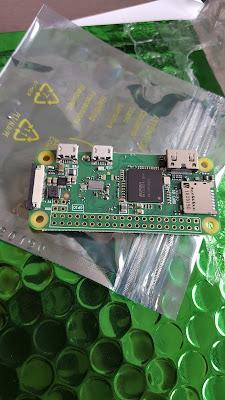 One thing that was on my mind is: does the integrated solution draws more or less power other than attaching external Wifi and Bluetooth.
The solution I found most similar to the configuration on the new Pi Zero W was the HAT from Redbear. It also extends the Pi Zero with the same connectivity as the new one has now.
So I installed the same Version of Raspian on both models (Kernel 4.4, Release Date: 2017-03-02), turned Bluetooth on and connect with active Wifi to my home network.

Well, kind of a tricky question, isn't it? On the first sight, you see the same-sized board with identical specs for more than the double of the price. But think about it. If you want to use it, as a streaming-client, a home cloud server, a broker for IoT projects or even a small PC, you need what? Internet connection. So you need a Wifi dongle. And since it wouldn't fit, you also need a OTG adapter. And a small USB hub would be also nice. Oops! That's a lot of extra to buy.

If you are looking for a small single board computer as a replace for a Lunix based desktop computer, you should probably go for the Raspberry Pi 3.
But if you want to buy a Pi Zero anyway, you should go for the version with the integrated connectivity. Because if you are a maker and want to build your own IoT device, a Webserver or even a autonomous robot, you wish earlier or later that you can communicate with your Pi.
Eingestellt von Agis Wichert um 1:23 PM No comments: 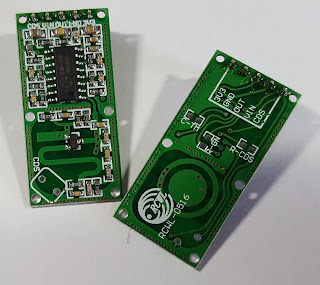 Ever want to build an alarm system?
The RCWL-0516 is a human body motion detection sensor. A sensor, that detects, through induction, human body movement. So it should only react if a body movement is detected. Moving objects should be ignored. How cool is that? 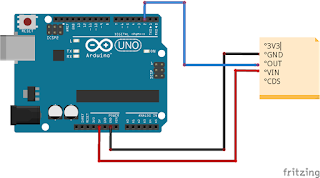 Pin 3V3 on the RCWL-0516 is an output. And the CDS-pin you can attach a light sensor. I will cover it in a later video.

Seriously? You set the pin, the RCWL-0516 is attached to, as an input. And if you register a 'HIGH' signal, you do stuff. Watch the video. Coding is done in 2 minutes.

Update 29-05-2017
This sensor seems to get quite an attention. There are some questions that some of my viewers asks. Here is what I found out.

Q: Can you use the RCWL-0516 with an ESP8266? Or will you get randomly false positive results?
A: I've done a short term test with the ESP8266 on a NodeMCU board. It seems to work just fine.
The ESP greater Version 12-E is shielded and is FCC certified. So it should, by definition, not interfere with other electronics.
However one viewer reported randomly false positive results on a long shot.

Q: Is the water in the human body responsible for the detection?
A: Probably. I tested it with an empty and with a water filled bottle. And even with a cat. And it seems that the bigger the object the further away it can be detected.

Q: Can it be mounted mobile to detect persons?
A: No. The sensor seems to be quite sensible to movement itself. Any movement of the sensor itself seems to trigger the output.

Q: Does the radiation of the sensor harm you in long term?
A: No. The Sensor uses about 30 milliwatts (mW). The radiation output is limited to that value. That is far less than your smartphone emits.